Writer: William F. Nolan (Based on a Robert Marasco novel) 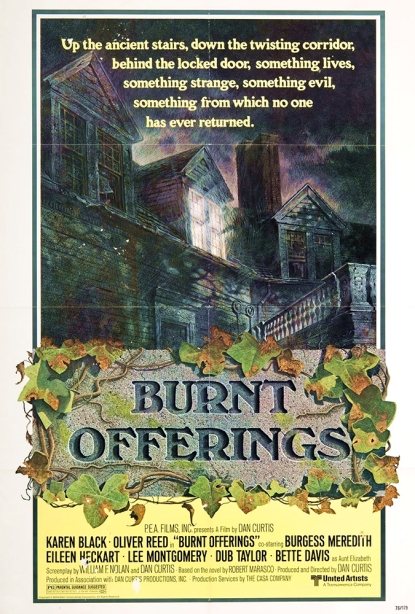 Released in 1976, Burnt Offerings is chock full of famous Hollywood stars of the past and the then present, with Oliver Reed and Karen Black leading a veteran cast consisting of the legendary Bette Davis, much celebrated character actor Burgess Meredith and Eileen Heckart. The film starts with the ‘Rolf’ family driving to see a home they are looking to rent for the summer. Ben (Oliver Reed), Marian (Karen Black) and their young son Davey (Lee Montgomery) are taken aback when they see it’s more a Mansion than a house as they drive into the grounds.

They are let in by the grounds keeper and handyman ‘Walker’ (Dub Taylor). He’s rough around the edges but a friendly enough type. He brings down the lady of the house Roz Allardyce from the second floor and she shows the Rolf family around whilst young Davey takes the opportunity to go and play outside in the large grounds. As Roz and the Rolf’s talk, Arnold Allardyce (Burgess Meredith) can be heard cursing his stair lift as he makes his way down stairs to meet the possible new tenants. 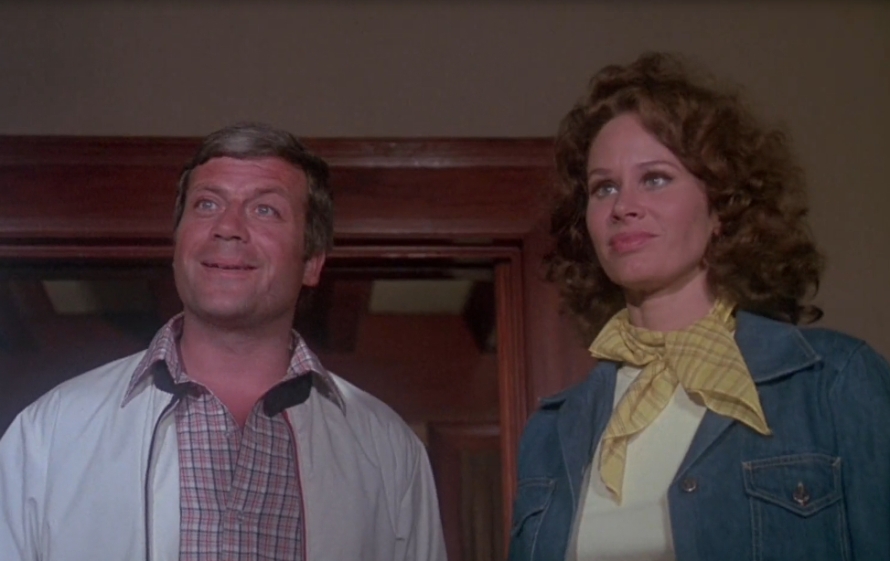 Roz dashes off to help him, and returns pushing her ailing but mentally alert brother Arnold in his wheel chair. After a brief chat Arnold expresses how much he likes Ben and Marian, before being taken to the window by his sister Roz to see young Davey climbing around in the gardens. It isn’t long before they talk business and Roz tells Ben the price will be $900 which Ben assumes is a monthly payment and before he can say he cannot afford that, Roz explains that the amount is for the entire summer.

Ben can hardly believe his ears and wonders what the catch is? In an unexpected and very serious manner the Allardyce’s explain that it’s not about the money, and that they require tenants who love the huge country house as much as they do. They also explain their 85 year old mother will be staying with them in the house, but that she never leaves her bedroom and study area which is up at the very top floor of the home, and that providing the Rolf’s take their mother a tray of food three times a day, that they’ll very probably never even see her. Marian emphatically agrees that she would love the home as much as the owners do and that looking after their mother will be no problem, whilst Ben seems to have his reservations.

He thanks Roz and Arnold and tells them he’ll be in touch soon with a decision. Once back home Marian convinces Ben to agree with her that the beautiful house and the unbelievably cheap rent is too good to pass up on. The next day Ben calls Roz and tells her they’ve agreed to take on the property for the summer, and that they’ll be joined by an elderly relative, Aunt Elizabeth (Bette Davis). 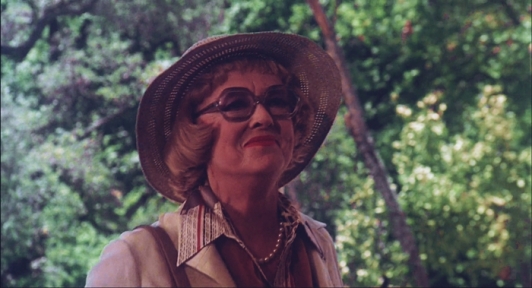 Roz is extremely pleased and tells them she’ll see them come the beginning of the summer. The Rolf family arrive to find that the Allardyce’s have already vacated, even ‘Walker’ is nowhere to be found. There is a brief note on the door wishing them a happy stay, and the door key is wrapped in with the welcome note. The Rolf’s think it odd that the owners should leave before they had arrived but shrug it off and enter the large house, admiring its many rooms and decor. Now, the old saying goes, “If it’s too good to be true, then it probably is” and the house has some surprises in store for the Rolf’s.

As they begin to clean the place, Ben decides he’s going to fill the empty swimming pool with the help of his son Davey whilst Aunt Elizabeth sits in the shade watching them toil. As this is going on we see Marian up on the top floor of the old house, finding an ornate music box and plays it. Back at the pool Ben and Davey eventually clear it out and get the water pump working and before long they are ready take to a swim. Ben finds an old pair of cracked spectacles near the pool side which he tries on for size, but soon places them back on the pool side and goes to play in the pool with his son Davey.

At first things are perfectly normal with Davey happily doing flips in the water with his father but things soon take a dark turn. Ben begins throwing his son around the pool like a rag doll and starts to hold him under the surface near drowning poor Davey as Aunt Elizabeth screams for him to stop. 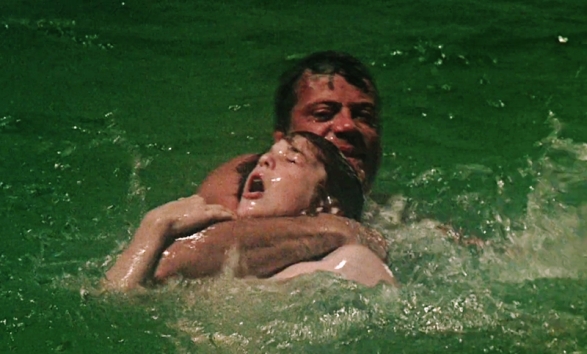 At one point Ben is actually holding Davey upside down with just the panicking boy’s legs protruding the surface. Desperately young Davey struggles free long enough to swim to the bottom of the pool recovering a snorkel and as he surfaces he sees his father swimming toward him with murder in his eyes, Oliver Reed can really project menace when he needs to and in this scene the look on his face will send shivers down your spine. 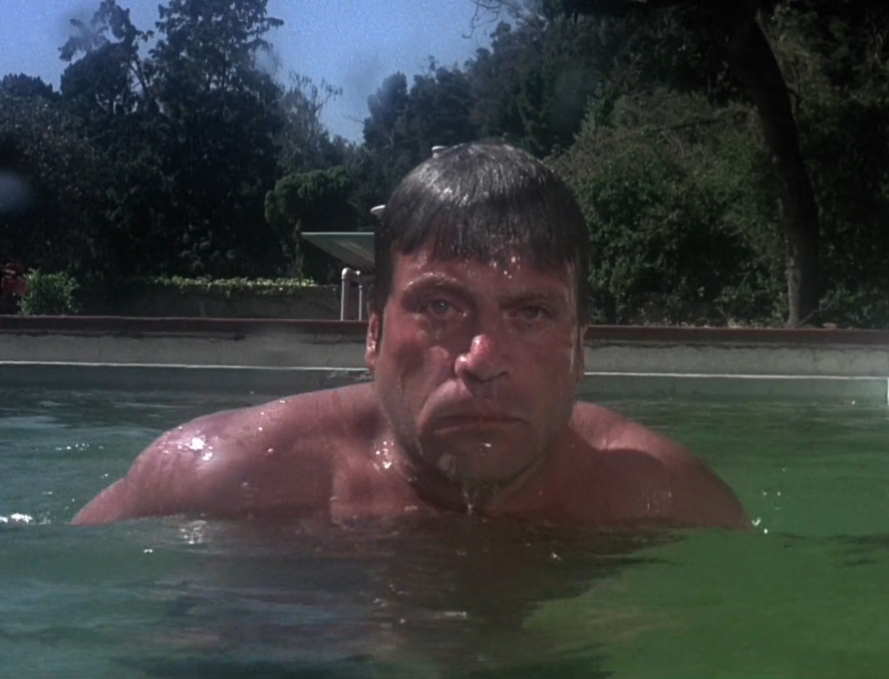 Davey hits Ben directly in the nose, bloodying it, and making good his escape. That night Ben dreams of his mother’s funeral and in particular a tall creepy Hearse driver and awakes in the middle of the night and decides to leave his sleeping wife Marian to rest as he goes down stairs to ponder the day’s events. Marian hears Ben and follows him down and the discussion they have about the incident in the pool is a telling one;

(Ben) – “Rough-house! You were not there Marian for Christ sake” 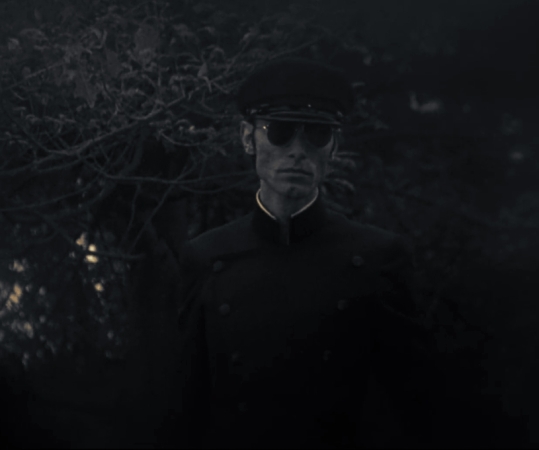 Ben and Davey make up in a heart-warming scene the next day and Ben wanders off into the Garden to drink a few beers as the summer heat is in full swing. Suddenly the tone changes abruptly as Ben sees a Hearse driving along the country road leading to the front gate of the country house. A truly creepy moment occurs when Ben sees who is driving. 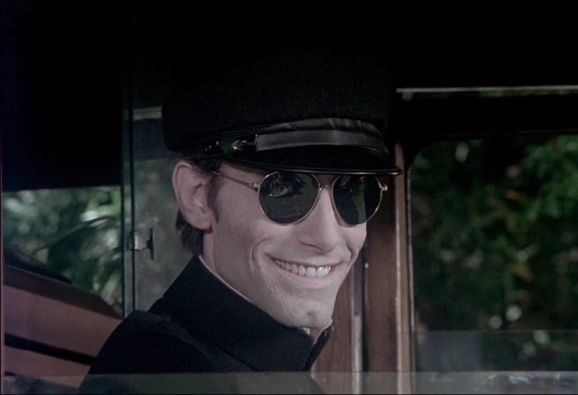 At that point, you’re left wondering if Ben is losing his mind, he certainly thinks so, but soon things become even stranger. Marian notices the pool seems to have cleaned itself. Aunt Elizabeth is taken ill, losing all the color from her hair, as if the house is draining the very life from her and in a nightmarish scene which I won’t reveal here, Aunt Elizabeth passes away. 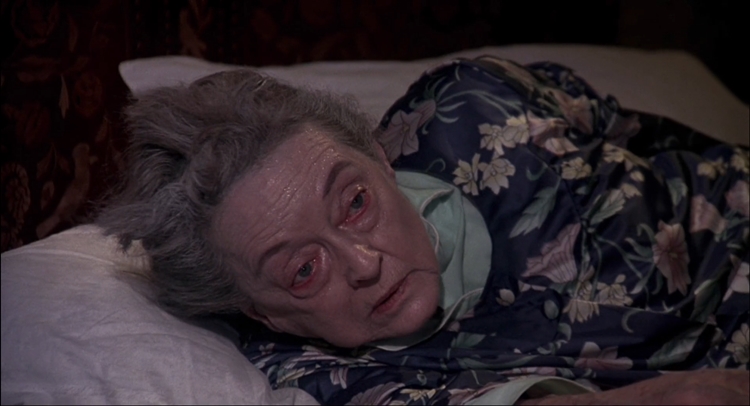 As odd things continue to happen, Marian seems to be willfully ignoring it all, even missing Elizabeth’s funeral. The movie builds to a truly bizarre crescendo which for the benefit of anyone reading who has not watched this movie, I’ll not go into, aside from saying it has one of the creepiest final few scenes in a horror film I’ve ever witnessed.

The cast as you’d expect all do a brilliant job with such strange material and although ‘Burnt Offerings’ is far from a perfect film, there’s no doubting there isn’t another horror film out there quite like this one. You may be thinking I’ve discussed near enough the entire plot, but I assure you I’ve only scratched the surface. My suggestion is get hold of a copy of ‘Burnt Offerings’ and judge for yourselves. I’m willing to wager the majority of people seeing the movie for the first time will be pleased they sought it out.