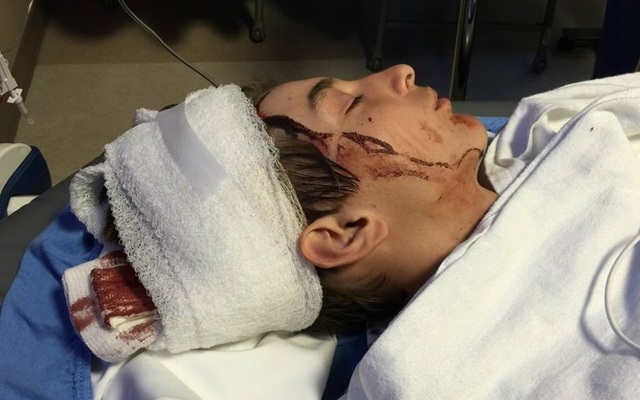 Say what you need to say!

I responded to a call at 5:30 am. It came in as “pedestrian struck.” It was the time of year that it was still pretty dark at that time.

As we rolled up on scene we could see several police officers surrounding a man who was laying in the middle of the intersection. He was moaning in pain, and was bleeding from his head arms and legs. We immobilized him and carefully put him on the stretcher and headed for the trauma center.

The gentlemen was able to tell us his back story. He was on his way to work and was crossing the street at the traffic light and a car came out of nowhere, struck him and proceeded to leave the scene. He flew about 75 feet from the point of impact. He was however able to breathe on his own and remained alert the entire time and was able to give us his brothers phone number to contact him and even gave us his bosses number and asked us to call him in sick.

About 15 minutes from the trauma center he told the paramedic that he couldn’t feel his legs. The “oh shit” moment we all dread. We got him to the center where we had an entire team activated and waiting for us. The patient was able to also give them his entire story. When we looked at his x-ray we were all in total shock! This man’s neck and spinal cord were COMPLETELY SHATTERED!! It looked like a mass of puzzle pieces that used to fit together but didn’t anymore. There was no earthly way this man should have been able to even breathe on his own, never mind speak to us. I firmly believe (in my personal faith) that God (or whatever higher power you believe in) wanted this man to be able to tell his story. We witnessed a miracle in my humble opinion.

Why do I share this story? I share it because our founder and editor in chief has had the courage to share his own story, not for sympathy but just in the hopes that his experience might bring comfort and hope to others. I have known him for decades, and he does not know ahead of time what I write about, and even though he doesn’t want the words I’m about to say, he has to publish them regardless. (Sorry Ant, not sorry.) I need to say to him that I admire his strength, his courage, his faith, his generosity and his selflessness in giving of himself. I need to say that I admire his will to fight, even with his matter of fact attitude and I admire his talent with the written word, and I need to say it while he can read it for himself!