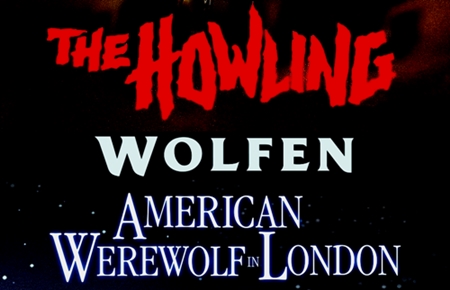 Torchlights Chillers #5 1981: The Year of the Werewolf

As a new decade arrived, filmmakers, and in particular independent horror genre movie makers like David Cronenberg, George A. Romero and John Carpenter (and many notable others) had paved a way onto the big screen by keeping budgets as low as was reasonable and reaped big rewards at the box office. This obviously hadn’t gone unnoticed by the big Studios who by then, had large distribution networks for the new wave of independent movies to be shown throughout the USA, and if a studio believed enough in a movie with a budget of just $300,000 (and often less), IF it past the screen test, suddenly a modest picture was being shown across thousands of Cinemas and more often than not, distributed to other English speaking countries (as a priority, although none English speaking countries also saw these movies released in a Cinema near them).

The order of the day in the late 1970s American Horror genre was ‘slasher’ movies (very similar to the Italian Giallo movies of the late 60s and 70s). Halloween and Friday The 13th were smash hits and horror fans lapped those movies up. Although American Cinema had produced excellent often chilling psychological horror movies throughout the 70s, aside from the very odd film, there wasn’t much in the way of Werewolf movies made. Back in the Golden era of the studios Universals monster pictures were big business, and many years later, British Production company ‘Hammer’ reignited those horror character’s with 1958’s ‘Dracula’ starring Christopher Lee and Peter Cushing.

Quite how it occurred I’m unsure, but by mid-1980 the Hollywood producers were clamoring to hire writers to get a modern take on the ‘Werewolf’ creature feature made. The films that came out in 1981 were;

An American Werewolf in London

Two of the movies were adapted from novels, those being The Howling and Wolfen with John Landis writing the story of An American Werewolf himself and bringing in writers John Sayles and

Wolfen was originally a novel by Whitley Strieber and the movie shared the books title.

The Howling novel was written by Gary Brandner and again the movie retained the books name.

I’m going to begin with The Howling since that movie was first out the gates, being released in April, April 10th the be exact. Because these films were all in various states of advanced pre-production or actual production around the same time the race was on to secure the best talent for the special effects which back before CGI was invented was an art form. Rick Baker was originally provisionally offered the position but jumped ship to the higher budgeted An American Werewolf in London but not before discussing with either producers of The Howling, or his special effects replacement Rob Bottin on the technique of the facial morphing in the human to Werewolf transition scenes.

Joe Dante directed The Howling, a fine director for this type of picture, and the lead roles were secured by Dee Wallace, Patrick Macnee, Dennis Dugan, Christopher Stone and Belinda Balaski.

The film itself is actually fairly surreal. We begin things with a TV reporter Karen White deciding to take it upon herself to entrap a vicious serial killer named Eddie Quist. Karen lures the killer into a sleazy sex shop which has a porn booth. As planned the killer turns up moments later, we never see his face, but there’s a strange sound to his voice, the two speak briefly before the killer tells her he has something to show her, Karen begins screaming as Eddie writhes around as he changes, knocking things down and creating a lot of noise, which two cops hear and rush in to help.

The young cop shoots Eddie dead, and Karen is traumatised by the terrifying experience.

So shell shocked is Karen that she is suffering from Amnesia so her therapist, Dr George Waggner (played with relish by the excellent Patrick Macnee) suggests that Karen and her husband Bill take a break in a remote resort in the seclusion of the woods and countryside. He tells Karen he knows of a cabin she and Bill can stay and that Dr Waggner considers this part of her recovery.

The film then changes tone from the nitty gritty city scenery to the sublime woodland and spacious, practical cabin the couple stay in. As the movie progresses the couple meet the locals and realise all is not what it seems as their idyllic stay becomes a nightmare of lycanthrope proportions.

The films reception was fairly positive, with some detractors moaning that it strayed too far from the novel but these were in the minority. The films budget was $1.5 million supplied by Production companies International Film Investors & Wescom Productions. The Howling grossed $17.9 million

Which wasn’t a bad return, equating it roughly to today’s money the budget would be $4,227,000 and the gross would be around $48,000,000. Everyone was happy. How would the next Werewolf film fare coming so soon after a modest hit like The Howling?

Wolfen had Warner Bros and Orion Pictures backing it, and thus ensuring a hefty budget of

Although there were no ‘’transformation’’ scenes as such (depending on your point view) the budget was spent on cast and an expensive new effect akin to thermography which was utilised as a P.O.V effect, as though we see the way the ‘’wolf’’ sees.

I say wolf and not Werewolf because Wolfen is based more on the Native Indian beliefs in shape shifters, men, warriors who can transform into Wolves which I guess was at least a radically different vision than The Howling. The movie starred the much in demand Albert Finney, Diane Venora, Edward James Olmos, Gregory Hines and Tom Noonan. Apart from the established character actor Tom Noonan, only the BAFTA award winning and multiple Golden Globe nominee Albert Finney was the only ‘’Face’’ Wolfen had. The rumour mill has it that to do Wolfen Finney demanded a large pay day. The problem with Wolfen isn’t the cast, it’s not even the premise, but it’s the waste of budget on what are today in-camera affects you can get on your smart phone, as well as the fact that many movie goers who had seen and enjoyed The Howling simply hated Wolfen.

Orion and Warner had spent too much on a flawed concept.

The third of the trio was An American Werewolf in London directed by John Landis who also wrote the story. The film cost much less to make than Wolfen, at $5.8 million, and having poached special effects genius Rick Baker from The Howling, the visuals in ‘An American Werewolf…’ were better than both Wolfen and The Howling put together.

David Kessler (David Naughton) and his best friend Jack Goodman (Griffin Dunne) have decided to have a vacation in England and find themselves near the Moors which is basically a vast area of bog land and grass. They see a Pub and enter ‘’The Slaughtered Lamb’’ for some food and a hot drink (which they’re advised aren’t for sale, its beer or nothing).

Jack makes the mistake asking why there is a Pentagram on the wall to which he gets short shrift.

Then the distant ‘Howls’ from out in the Moors begin. I recall first watching the movie and those bone chilling howls. As the two American’s feel they’ve outstayed they’re welcome, the landlady pleads with the seemingly boss of proceedings played by Brian Glover (His character name is only ‘Chess Player’).

As they walk they hear a close by growling. They cannot pin point what is making the growls but are pretty sure it’s not a dog. They pick up pace and run as they hear the unknown creature behind them when Jack falls flat on his back. David offers his hand to help Jack to his feet and out of nowhere a huge Werewolf leaps literally on top of Jack clawing him to pieces, Jack is screaming in agony and for David to help. Fight or flight kicks in and flight wins as David begins to run.

Loyalty win’s the day, and David runs back, seeing his friend shredded to bits on the floor.

Then the Werewolf jumps at David biting his shoulder and the force knocks him semi-conscious, luckily for him, the locals back at the pub appear and gun down the beast. As David drifts in and out of clarity he sees a dead human, not a monster. He then passes out and wakes up several days later being tended to by the very beautiful Nurse, Ms Alex Price (Jenny Agutter). The police interview David but his story sounds like gibberish and they disregard him. However, the Senior Dr Hirsch decides to investigate and visits The Slaughtered Lamb but Brian Glover’s character warns him to stay out of local business. This only intrigues Dr Hirsch more. David has some far out hallucinations in his dreams (if you’re one of the few people who haven’t seen this movie I won’t spoil those details for you), and when it comes times for his discharge Nurse Price offers her home for him to stay.

Attraction takes over and the two have sex. Then … the infamous transformation scene which still looks great 37 odd years after it was filmed. David as the Werewolf creates havoc in London with some especially taut scenes. Jack comes back from the dead to tell David to kill himself, because

Landis didn’t have a novel to tie him up in narrative knots and he created an extremely brilliant film. He put laughs where they provided light relief in the pretty disgusting looking rotting corpse scene where the afore mentioned Jack shows up to warn David Kessler that he has indeed become a Werewolf after the attack on the moors and must kill himself.

The movie was a smash hit, horror fans loved it, and the box office reflected that.

It was a better movie than Wolfen and The Howling, its budget was well spent, it earned a large box office and has gone down as THE best Werewolf film ever made.

Nothing since has captured its many different qualities of humour, horror, special effects genius and excellent casting. There was a sequel of sorts called An American Werewolf in Paris, now I do not believe anyone sets out to make bad movies but ‘’…Werewolf in Paris’’ is just a dire misfire.

The Howling did well enough to become a Franchise and on a kitsch level, the 2nd and 3rd instalments are worth seeing, but avoid the rest unless you’re a glutton for punishment.

Oh, before I go, talking of sequels, The Howling was remade in 2011 under the title ‘The Howling: Reborn’ and is a bore from start to finish.

So what did we learn through our trek through the trio of Werewolf movies of 1981?

Write a great story, don’t waste money on huge budgets and remember to … stay on the path.