The Evil Poor formed in 2009 with members of other cult Mancunian groups, Robert Corless front man of Gabrielles Wish takes on the same duties with The Evil Poor. Guitars are provided by Tim Walsh (Ex-Northside guitar who were signed to Factory Records). Other members include Andrew Saunderson (Ex-Merchant Four) and keyboards and Hammond by Jack Wakeman who also has a solo career.  On Saxophones are Neil Pearson and Matt Nickson with flute provide by ‘Samantha’.

The mini album opening track ”Diametrically Opposed’’ is a lush melodic yet melancholic musical journey with Tim Walsh’s signature chiming guitar and superb Sax provided by Matt Nickson and Neil Pearson. “Talk about This Talk about That” bulldozes and crashes with Tim Walsh’s and Andrew Saunderson’s bass locking in to form a formidable backing as Robert Corless muses upon the modern trend toward continually dependent on social media chorus as Robert Corless sings ”I’m around the corner … I’m on my way” showcasing just how much we track our own, and other peoples movements with these devices.

‘’ Siddhartha’s Road’’ takes a mid-eastern flavour as vocalist Robert Corless sings ‘’I’ll stand tall with all your love, and I’ll leave now, with all your misery’’. It has an infectious Eastern groove that’s hard to resist. ‘’Take Me to the Worlds End’’ explodes with the distortions in Tim Walsh’s various layered guitar work, the drums hardly able to to contain the chaotic track that musically lives somewhere between Captain Beefheart Magic Band Mike Patton if he was having a particularly experimental day.

‘‘JBJs Back In Town’’ begins softly with gliding slide guitar by Tim Walsh. Robert Corless sings ”Cast the first stone brother, let the blind see the fool”. The biblical sounding lyrics aren’t unusual for Robert’s lyrics, which are often inspired by philosophers of old and the ideas of today’s leading progressive thinkers but the religious texts of the ancient world are mined for lyrical idea’s. The philosopher Robert had in mind here is the provocative, visceral but always outstanding singer songwriter Joshua Ben Joseph. 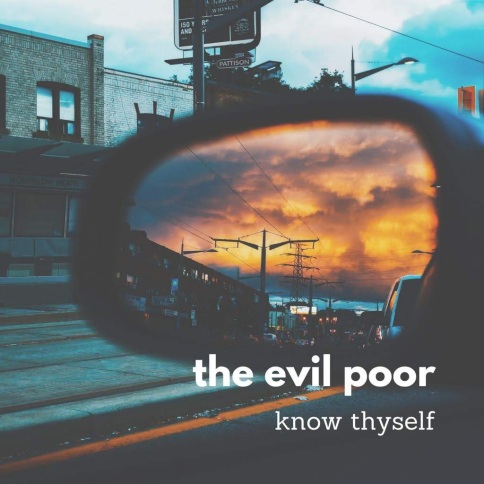 For ‘’Elizabeth Said to me’’ The Evil Poor show their versatility with the instrumentation being a child electronic music track. Tim’s guitar reminds me of a Pink Floyd style riff. The lyrics recounting the questions of a loved one.

The Evil Poor ‘Know Thyself’ mini album exclusively available via Band camp and is out today. You can stream/buy here https://theevilpoor.bandcamp.com/releases