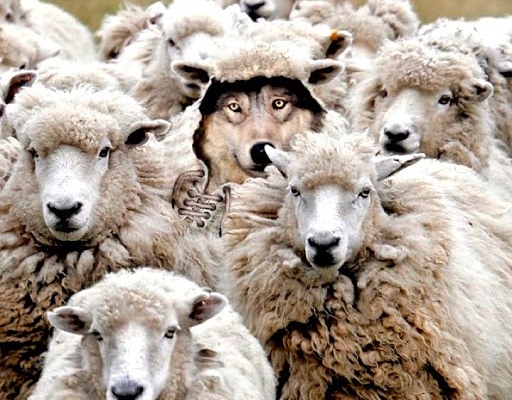 This panic and shutdown based on flawed and faulty information reminds me of a funny story when I was in the first grade.

We were having school held in a nearby church with a big steeple, while our new school was being built nearby in Midland Park, NJ.

It was recess, and I was six years old, running around, playing stupid games with my friends on the playground, which was really just a repurposed church parking lot.

Then the teacher came out ringing a bell signaling recess was over. I was having so much fun, I really didn’t want spoil it all and go back into that dark, musty, old church.

Suddenly, I looked up in the sky and there were some big, fluffy clouds floating past that high steeple. It was then I noticed that if you looked at it from a certain angle, the cloud movement behind the steeple really made it look like the steeple was falling. I’m sure everyone is familiar with this common optical illusion, as I was, but seriously, I had to look twice.

Then I got a very bad idea to play a prank to extend our recess time.

I ran over and grabbed the old spinster teacher, Miss Farrell by the hand. She was a cranky, little old lady, a little hard of hearing, with thick glasses, orthopedic shoes, and squinty bad eyesight. She sort of looked like Edith Bunker from All in the Family. She was always handing out demerits and punishments for stupid stuff. We didn’t much like her.

I shouted at her with my big, blue, scared eyes that “the steeple was falling down.” I was waving and gesticulating frantically as I delivered the news.

I must’ve been pretty darn convincing, even at six, because she looked and looked, and then suddenly her face looked quite upset, and she ran and rang the fire alarm to evacuate the school.

She evacuated and shut down the entire school. I never expected this!

We got an extra half hour of recess, until the principal came running outside and finally figured out what exactly was going on.

We, being stupid, innocent kids, didn’t consider the consequences and thought the whole thing was hilariously funny.

The principal, thinking I was just a stupid, innocent kid who really believed the steeple was falling, didn’t punish me. So I didn’t get in trouble and nobody got hurt.

I thank God to this day that poor old Miss Farrell didn’t have a heart attack, although the whole thing must have been terribly embarrassing and humiliating for her. I felt so guilty for her humiliation.

At that moment, I learned my lesson about the dire and often unintended consequences of crying wolf.

This farce we are going through now with COVID-19 reminds me very much of that event. Except, of course, the stakes are much larger. The governors who shut down their states and curtailed our rights were like Miss Farrell. The fear of what ‘could’ happen exceeded all rational thought and clouded their reality. And sadly like Miss Farrell, many of our governors weren’t that bright.

The story was so convincing and told to them by so many people with feigned fear in their eyes they were convinced they saw something that simply didn’t exist in reality. So they caved and closed everything down. They rang the alarm and evacuated the economy based on some nebulous cloud formations.

It was a clever illusion, a hoax, shadows on a wall, playing on all their fears and their inflated sense of duty and responsibility.

And of course, they and the media turned it into a dog and pony show, whipping up fear to a level of frenzy not seen since “The Exorcist” debuted in theaters.

The cock and bull story that our National and Global Health Dumbos told the nation, based on their Micky Mouse models was so convincing that our feckless state and local politicians were convinced they saw something fearful on the horizon that simply didn’t exist.

And let’s be clear: they saw something, but it was something else. They saw the mass confusion and fear and ultimate salvation of a crisis, covering their lack of preparedness. And they hoped a massive flood of federal disaster relief money would covering their squandering of tax money and refloat their disastrous pension and budget deficits.

And one more added bonus: they saw this crisis as a huge opportunity to try and smear and possibly unseat a President who threatened their own deeply corrupt status quo, which had been crafted over a century.

And the truth is, nobody knew the truth, but yet they readily based decisions on vastnuncertainties. Which in itself is pathetic.

Because our state and local leaders didn’t have enough brains or sense of their own to make an independent decision; because they knew they were woefully unprepared for a medical crisis; because they knew from Hurricane Sandy and Katrina and from 9/11 that a big flush of federal taxpayer money always follows a big crisis and always makes things like budget shortfalls and gross public mismanagement so much better, they made knee-jerk decisions and rang all the alarms, and shut down the greatest economy in our history for a disease that is revealed now to be less contagious than SARS or Bird Flu.

All this for a disease less lethal than a bad seasonal flu which had already killed nearly 60,000 Americans this season, yet hadn’t prompted a single shutdown. Until now.

And so here we are, $6 trillion in the hole, our mortgages and rents due, sitting on our sofas like masked and gagged idiots, with garages full of toilet paper to battle the certain shit storm to follow.

How embarrassing this must be for those members of the Greatest Generation who are still with us.

We stormed the Charmin aisle and hid in our houses eating Häagen-Dazs under a flimsy mask.

Boy I can’t wait to tell the great grandkids.