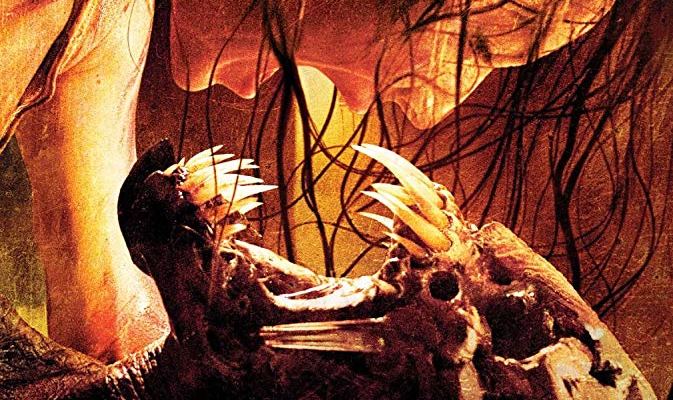 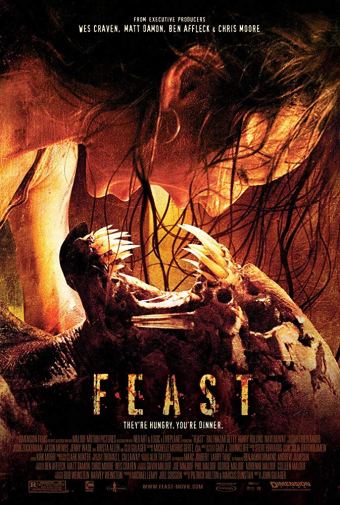 Okay let’s have fun and start this whole thing back to front.Two years after ‘Feast’ was released, Robert Rodriguez and Quentin Tarantino directed a movie each in the double feature called ‘Grindhouse’, a tribute to the exploitation genre pictures from the 60s/70s and to a degree the 1980s which they both admired.

(both were involved with future ‘Grindhouse-esque’ type features to come, Rodriguez giving the world ‘Machete’, and Tarantino’s 2008 ode to motorcycle gang movies, ‘Hell Ride’: although arguably the best was to come in the form of ‘Hobo With A Shotgun’ starring the recently passed Rutger Hauer directed by Grindhouse writer Jason Eisener)

Yet before those movies existed, we were given a heads up with ‘Feast’ which indulged viewers with purposely corny, often hilarious dialogue, fun, but gory action scenes, and although the footage wasn’t purposely made to appear aged like the future ‘Grindhouse’ double bill and their successors would be, ‘Feast’ easily fits in with the spirit & the vision shared by Robert Rodriguez and Quentin Tarantino, so much so, I wonder if they saw ‘Feast’ and were influenced enough to make their big screen ‘Grindhouse’ double feature’?

So, back to 2005 and ‘Feast’. If you had a fleeting read through the movies credits you’ll have noticed that Wes Craven, Ben Affleck and Matt Damon lent their heavyweight names to the films long list of the Associate Production team. Everyone involved either had direct experience with Horror (as in Wes Cravens case) or were clearly lovers of this homage to B Movies.

The next thing you’ll have noticed is the eclectic cast that the then fledgling director John Gulager had at hand. Balthazar Getty was at one time in his career nose to nose to become an A-List name around the time Leonardo DiCaprio emerged and began to lead that generation’s pack by quite some considerable distance. Balthazar had his own personal demon’s to deal with, yet still managed to be part of several cult films such as 1992s ‘Where the Day Takes You’, a cameo in 1994s ‘Natural Born Killers’, and David Lynch’s brand of surrealism in a large role in 1997s ‘Lost Highway’. 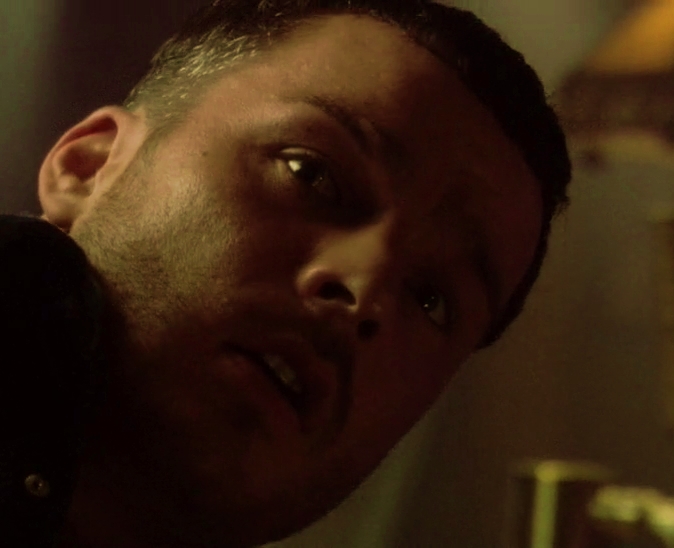 (Also worth seeing for Balthazar Getty or B Movie fans; the bizarre 1997 Eco-message driven craziness of ‘Habitat’, and the voodoo drenched ‘Fait Acompli’ co-starring Michael Madsen. Final words on Getty oddballs worth seeing are ‘Out In fifty’ from 1999 starring Mickey Rourke and featuring Getty in the cameo role as a ‘pimp’, and lastly but not least the solid psychological thriller ‘Shadow Hours’ from the year 2000 which pitted Balthazar Getty against Peter Weller)

Also in the cast of ‘Feast’ is cross generational music/acting hero Henry Rollins (a man with a rich and varied career) also cast is one Mr Clu Gulager, whose accomplishments date back to 1955 as he graduated from TV to film and back many times over.

Gulagers first big Horror credits started with 1985s ‘Return of The Living Dead’ in his stoic, perfectly played portrayal of ‘Burt’ the business owner of the location that the zombie tanks are housed. 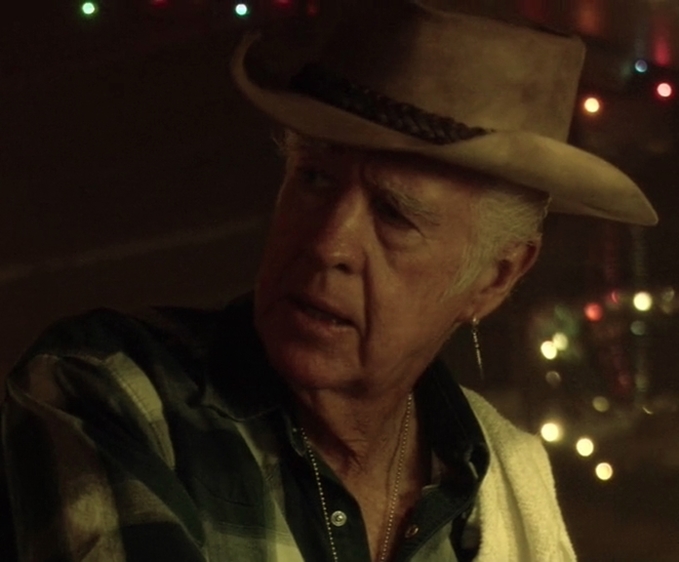 Back to ‘Feast’, I could go on with the cast, and its various actors’ filmographies, but I’d be here all day (or night depending on how long this review takes me.) ‘Feast’ begins in a fairly average if somewhat secluded bar, and we’re introduced to each patron with a cool little written snippet as the screen pauses on them for a brief moment. Those are captured for you below (you may have to bring up the screens photo size if you’re reading from a mobile handset)

Read those? Good, now you know who is who, or at least you think you do, there are some red herrings in there. Anyway, Getty, who plays ‘Bozo’ is busy hustling the pool table, whilst upstairs the seedy owner of the bar, named ‘Boss man’ (played by the owner of the infamous shop in which Ving Rhames aka Marsellus Wallace & Bruce Willis ‘Butch’ the boxer make the mistake of finding themselves in during their life or death altercation in Tarantino’s Pulp Fiction) is upstairs sleeping with a barmaid who clearly isn’t there for the love of it. Back with the patrons, Henry Rollins is ‘Coach’, who makes a living giving motivational speeches. He plays the part as phony and as ‘full of it’ as his job title suggests. An elderly lady, ‘Grandma’ sits attempting to mind her own business, and a few other fairly innocuous characters are dotted around the bar.

The evening is abruptly interrupted as ‘Hero’ (played by Eric Dane) runs into the bar, covered in mud and blood, holding a huge gun, informs everyone he’s arrived to save their lives. The bartender pulls out a shotgun proclaiming ‘’mines bigger than yours’’ and the Hero puts down his gun, again stressing that if they want to survive the night alive they must board up the windows and lock down all the doors, and is then unceremoniously halfway hauled through a window pane and decapitated by one of the monsters.

As his dead body falls back into the bar from being dragged half out the window his lifeless and headless body causes panic, and his gun goes off as he falls to the ground, meaning the Bartender begins shooting and somehow shoots through the ceiling, Boss man who is still upstairs having his way with the poor barmaid gets his foot half blown off.

Then, ‘Heroine’ runs in (great names these writers gave the characters don’t you think?) the apparent lover of the very dead, ‘Hero’…. Not far behind her is a ‘’baby’’ monster that manages to get into the bar by smashing through a boarded up window, then eating through the body of the soldier stood protecting said boarded up window, before it jumps around the joint, firstly tearing the face off one of the pool players that Bozo has already hustled, before the monster spots a Bulls Head hung up on a high point of the wall and begins to try “humping” the skull, before it’s shot at then locked inside an ice box, STILL wriggling.

At this point, everyone’s a little jumpy, but things go quiet, for a few brief moments.

Pondering the situation, ‘Coach’ suggests a way they might survive, by killing the creature locked in the box and throwing it outside for the other hungry monsters to see, thus showing them that humans aren’t an easy meal. So, they carry out the plan, only to see two huge parent monsters decide to eat the dead baby monster and then replace its number by immediately having sex outside in the parking lot as the stunned patrons watch. No sooner have the giant … ‘things’ stopped mating, when a new baby monster is born.

If you think all this sounds crazy, its because it’s meant to be, and the gloriously gory action hardly abates until the movies final conclusion. ‘Feast’ isn’t supposed to be high art, but it attains its goals, which are to give a humble nod to the monster movies of the 80s in a fun, action filled way that would entertain you whether or not you’d seen the 80s horror movies its making such an ode to, albeit with its tongue firmly in its cheek throughout. Director John Gulager keeps the pace moving and delivers a stylish, cool, relentless action horror. 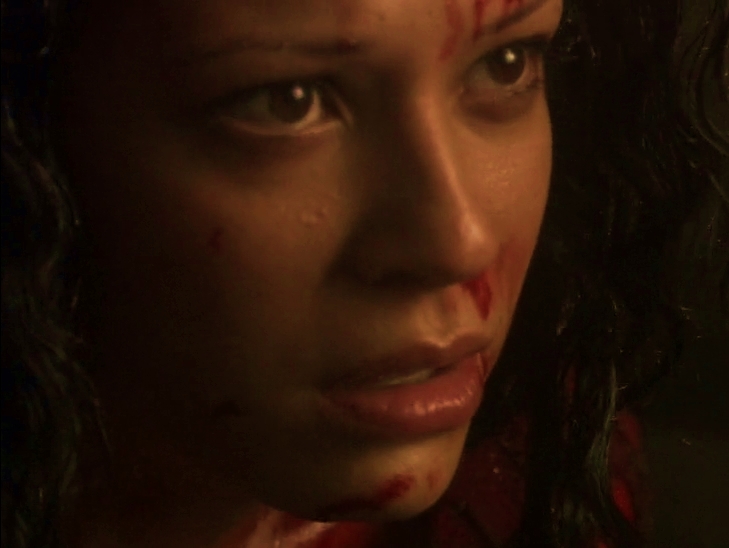 He went onto to direct two sequels, ‘Feast 2: Sloppy Seconds’, and ‘Feast 3: The Happy Finish’. Although ‘Feast’ did get a limited cinema run, it did its main business on DVD, and the two follow ups went straight to DVD. I haven’t watched the follow ups but given how well John Gulager directed the first movie I’m at least tempted by the notion of watching them some rainy day.

Gulager got his next cinema release, ‘Piranha 3DD’ in 2012, and has since released two straight to DVD/Blu Ray movies in the forms of 2013s ‘Zombie Night’, and 2018s tenth installment of the ‘Children of the Corn’ franchise, ‘Children of the Corn: Runaway’. So I guess Director John Gulager is following in the footsteps of many a great B movie horror director before him in releasing the great, good, bad and awful in the horror genre.

The cast all play the movie seriously, even with the loaded one liner dialogue and by the end, its Balthazar Getty’s ‘’Bozo’’, Henry Rollins ‘Coach’ and ‘Clu Gulagers ‘Bartender’ characters that leave the most lasting impressions. Am I saying ‘Feast’ is an amazing movie? No, but it is a fun one, and when horror and humor are done well, you always enjoy the ride. ‘Feast’ is funnier and faster paced than the later ‘Grindhouse’ movies I talked about earlier, and for all these reasons, I can recommend ‘Feast’ to the uninitiated as movie to put on your ‘to-see’ list.